The 2016 edition of Innovating Pedagogy is the fifth in a series of annual reports on innovations in teaching, learning and assessment that is published by the Open University (read a summary of 2016 report on Innovate Learning Review). Like past editions, it proposes ten innovative pedagogical trends. 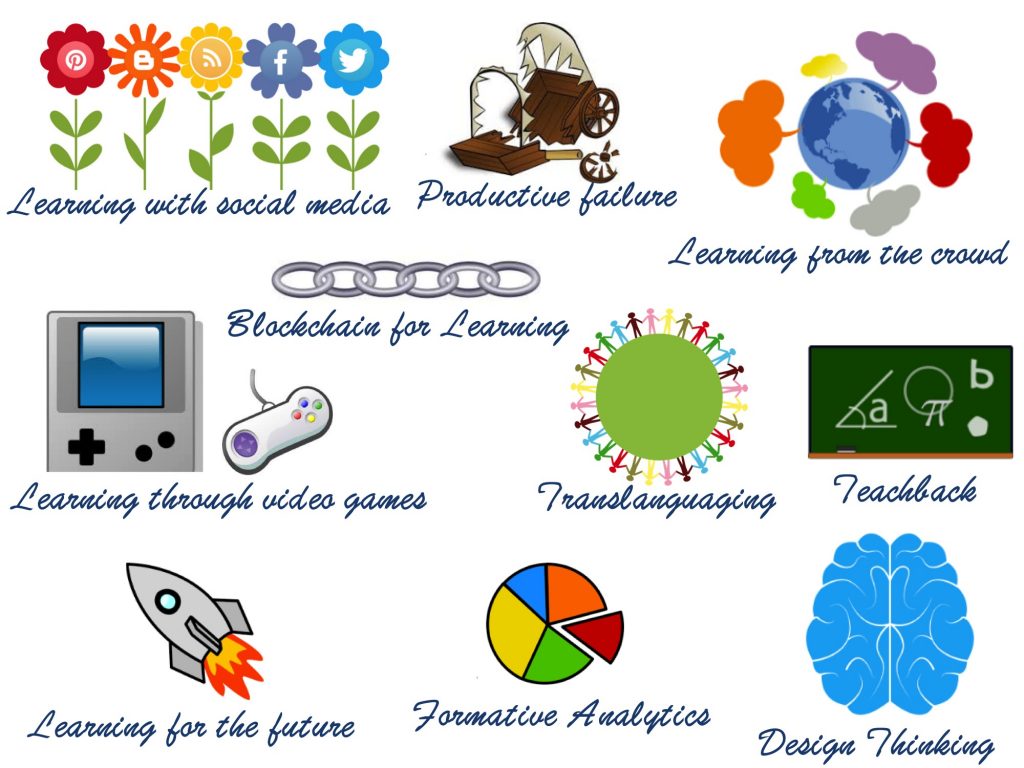 10 Trends from the innovating Pedagogy Report 2016

Each year, a group of researchers from the Open University, often in collaboration with academics from partner institutions, work together to compile this report by listing new educational terms, theories, and practices, and then selecting those with the potential to provoke major shifts  – particularly in postsecondary education.

How does this futurology process work in detail? When does the team start the process? Which concepts did not make this year’s list? I had the pleasure to talk to Mike Sharples, Professor of Educational Technology at The Open University (UK).

This is the fifth edition of the Innovating Pedagogy report. How did this series come into being? Whose idea was it to start the report and who helped creating a sustainable process?

The idea for the series came from my research into open education when I arrived at The Open University (OU) in 2011. I had read the influential Horizon Reports and realized there was a need for a similar report that focused on pedagogy rather than technology. I formed a small group at the OU and we discussed how to design the report, with its focus on informing policy makers about innovations in teaching, learning and assessment. We had a long discussion about what title to use, since at that time ‘pedagogy’ wasn’t a familiar term and was used by some to mean ‘didactic teaching’. We proposed a definition for ‘innovative pedagogies’ as theories and practices of teaching, learning and assessment for the modern, technology-enabled world. We wanted to establish innovation in pedagogy as a driver for educational change alongside new technology.

Now that the 2016 edition is published, is your team already thinking about next year’s trend report?

Yes, the process is already underway, starting with a discussion with the team from our partner institution and responding to requests from researchers and practitioners for their favourite pedagogies to be included.

How do you select partnering institutions as collaborators for the report?

We have previously built up strong partnerships with research teams in educational technology and learning sciences worldwide. The 2015 collaboration with our colleagues at SRI International was an experiment, to see whether a US perspective would enrich the report and if the production process could work across continents. It was a great success. We worked as one team, the SRI colleagues brought new perspectives, and we jointly promoted the report. The collaboration with NIE Singapore has been equally successful, so we intend to continue the partnerships.

Which tools and techniques do you use to compile the ideas and concepts and how do you select the ultimate list? Does every author get to vote? How do you handle conflicting views?

It just kind of works! We produce a very long list of candidate pedagogies (over 80, including some from previous years) in a Google doc. We then all add many comments and suggestions. Then all the contributors rate the pedagogies by adding stars to each one (as many as we want within reason!). Then we discuss the top-rated ones in a long meeting (held by Skype with the partner institution) until we reach ten candidates. These are not necessarily the top-rated ones – we like to have a mixture of obvious candidates (such as ‘Design thinking’), ones proposed by our partners (e.g. ‘Productive failure’) and ones that are more challenging or with long-term potential (such as ‘Translanguaging’ and Blockchain for learning’). Each has to be based on a firm underlying pedagogy, have evidence of use, and be conceived for a world of digital education.

We each write one or two summaries (we start with the summaries, since these are highlighted on the website and we want to make them clear and readable), swap and revise the summaries, then each write the main articles. Then I and Rebecca Ferguson spend some weeks over the Summer revising, editing and polishing the report before it goes off to be formatted and printed.

Overall, how much time does it take to compile the report?

We start the production process in February, write the summaries over the Easter period, and the main sections over Summer, then spend from September to November in editing and refining, including checking references and looking for further evidence of the pedagogies in use.

What are the best and the worst parts of engaging in future thinking with your colleagues, and then sharing the results with an international audience?

The best parts are coming up with the long list of ideas (some of them completely off the wall) and then having the enjoyable meeting to whittle them down to ten, seeing the final version in print, and getting the first feedback from colleagues.

The worst parts are the few responses we get that say “these pedagogies aren’t innovative at all”, or worse, “you haven’t referenced this groundbreaking work”. That’s one reason why we set up a website for the report and invite constructive comments.

Do you have personal favorites from the 2016 edition?

‘Design thinking’ is one favorite, because ideas from the 1980’s on how designers think are now being adopted and extended for a digital world. There many possibilities to connect designers and makers, as well as to take a design perspective on classroom and online learning. Another favorite is ‘Blockchain for learning’ since it was an opportunity to explore a truly novel pedagogy based on distributed reputational currency.

Are there trends that did not make the cut this year, but that you or someone in your team strongly advocated for?

Yes – but they may find their way into the 2017 report! One that was mentioned in the Introduction but didn’t get into the main report is ‘Spaced learning’, which has the potential to transform education.

Do you have any indication how influential Innovating Pedagogy is within the educational technology community?

We know that the 2015 report had over 80,000 downloads, and this year’s report is likely to do even better. We get positive responses from around the world. A measure of success is that we have managed to raise the status of pedagogy alongside new technology for education.

How does the report influence your own work and priorities?

A practical consequence is that I get requests to give keynote talks at conferences. The more immediate influence is that I have a greater repertoire of pedagogies and their application, to use in advising on developments to the FutureLearn platform and in enhancing teaching at the OU.

Which pedagogical technique will you try out in your teaching?

As a research professor at the OU, I seldom get the opportunity for direct classroom teaching. But one technique I do want to explore is ‘Productive failure’, particularly with PhD students – getting them to work together in trying to solve complex problems before being taught relevant principles and correct methods.

As a bilingual person, my favorite from this year’s edition is translanguaging. Are there any plans to offer Innovating Pedagogy in a language other than English?

I’m glad you like that– it has been one of the most popular themes from this year’s report. The 2016 report is being translated into Mandarin Chinese, for publication in February 2017 in the China Journal of Open Learning Research (with a link from the Report website).

Also, as an experiment in crowdsourced translation I translated the 2015 report into Spanish using Google translate, then put it up on the http://innovating-pedagogy.wikidot.com/ site, with a request to users to edit the document. I’m pleased to see that some Spanish speakers have made improvements to that version, e.g. “Re-phrase of some sentences. We are talking about “propuestas de innovación pedagógica” and not about “innovaciones””.

Mike Sharples, Professor of Educational Technology at The Open University (UK).  His research involves human-centred design of new technologies and environments for learning. It involves gaining a deep understanding of how people work, play, learn and interact as a foundation for the design of novel socio-technical systems (people in interaction with technology). He has authored over 300 papers in the areas of educational technology, science education, human-centred design of personal technologies, artificial intelligence and cognitive science.