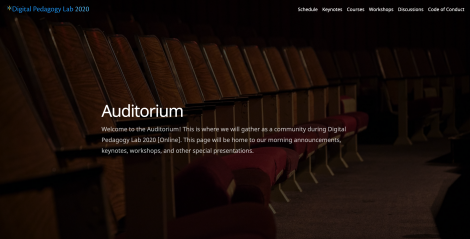 End of July, I participated in the first online edition of Digital Pedagogy Lab (https://dpl.online/). For those unfamiliar, Digital Pedagogy Lab is the professional development and practical training program from Hybrid Pedagogy (https://hybridpedagogy.org), the journal of critical digital pedagogy.

In case you, like me, get lost amongst all the adjectives, let me offer a few quick definitions. Critical pedagogy is teaching and learning, which critiques power structures, endeavoring to empower and cultivate agency amongst learners. Critical digital pedagogy questions the residual philosophies enmeshed in all digital learning tools and looks specifically at the impact technology and designed spaces have on student agency. Critical digital pedagogy endeavors to explore how we can better empower all participants in digital spaces.

Digital Pedagogy Lab is a week-long event where people from all parts of the educational landscape come together for group discussion and dialogue. The goal for all participants is to learn, grow, and question many things taken granted in an education context—from LMS usage to grades, attendance to assessments. There are also several smaller cohort-based groups assembled around a variety of topic-based tracks.

This year I attended the Critical Visual Dialogues track led by Francesca Sobande (https://www.francescasobande.com) and Daniel Lynds (http://daniellynds.com). I initially chose it because I am a graphic designer and design educator. It has been a long season, so I was hopeful we might spend the week making art and then talk about it; it turns out, not so much.

Critical visual dialogues consist of, as the name suggests, having a dialogue with and about the visual imagery and representations we all view and use in our daily lives. It applies a critical analysis lens (i.e., consciously questioning the larger narratives, stories, and viewpoints represented) to the visual imagery surrounding us.

It is a highly complex topic and, as I experienced over the week, seems to grow in complexity, the more one digs into all that is involved in the pervasive visuals that seem to fill our twenty-first century lives.

If you find your attention beginning to wander because you do not consider yourself a visual or artistic person, let me push back. Have you ever created a PowerPoint presentation and inserted any illustration, photograph, etc.? Or have you ever added an emoji, meme, or GIF, into text-based communication? If the answer to any of the above is yes, good news! You are a visual person.

It is safe to say that most of us are, on some level, visual people. How we learn and communicate as humans often bypass and transcend written or spoken language.

So, how do we do it? As I said previously, critical visual dialogues can be very complicated. Still, the good news is that it is not too hard to begin engaging with imagery from a critical perspective.

First, choose an image. This image can be as easy as looking at the last GIF or meme that might be on your camera roll, pulling up an image on a news outlet website, flipping through a magazine, etc.

Next, consider the following questions:

It may feel strange or hard at the beginning to think about visual imagery in this way because we often come to think of imagery as only playing a backup or supporting role to content. However, once you get some practice, you will most likely begin to unravel many things you may or may not have expected.

This engagement and these skills are vital both for us as people involved in education and for our students. A power far beyond merely its surface appearance charges imagery. Thus, it is crucial for us all, on some level, to also be comfortable engaging in critical visual dialogue and thinking critically about the visuals around us. If we dismiss images as “just pictures” or “just visuals,” we risk inadvertently passing on ideological or oppressive messaging that we might never dream of verbalizing or supporting.

My challenge to you: as you are preparing content for a new semester, preparing a new slide deck, even preparing a text to send off to a friend, take a second look at your chosen imagery and give it some critical thought. Is it doing what you hoped, or might there be something hidden you never expected? If a picture is worth a thousand words, be sure that the “words” you are using are ones you wholeheartedly believe.