Ellen Wagner is an independent learning industry analyst, strategist and solutions architect. Formerly the Director of worldwide elearning solutions for Adobe Systems, she had previously served as Senior Director of worldwide education solutions for Macromedia. Prior to that, she was chief learning officer for Viviance new education AG, an online elearning product and services provider. She also served as chief learning officer and vice president of consulting services with Informania, Inc. Ellen is a former tenured professor and chair of the educational technology program at the University of Northern Colorado, and project director with the WCET, Western Interstate Commission for Higher Education.

Curt: Q1. When was the first time you used a computer?

Ellen: 1974. A dumb terminal linked to a mainframe. I think sort of like what thin clients are like these days.

Curt: Q2. Do you ever purposeful try to stay away from technology? If yes, what do you do? (e.g., technology free weekends).

Ellen:It’s not that I stay away from technology – it’s almost impossible to do that anymore. Besides, I like my phone and my iPod, I take photos for fun and can lose hours while working on printing the images so that they are just right. But I do consciously avoid doing technology-mediated work on the weekend. Weekends are for engaging in the rest of my life.

Curt: Q3. Can you name a couple of unique ways that technology has affected your personal or professional life in a positive way? (e.g., online Flickr account, mobile learning, etc.)

Ellen: Well, sure – technology has provided me with a career! Actually, I suppose it was really a legal decision related to technology that paved the way for the long strange trip that I have been on these many years, rather than technology, per se. I got my Ph.D. 15 days before the Modification of Final Judgment (MFJ) went into effect back in 1984. The MFJ was the legal decision that broke up the AT&T monopoly. That was the event that provided the level playing field for new technology companies to enter into the data communications industries, which is what helped pave the way for innovations in computing, in telephony, in wireless communications, in broadband services, cable TV, and even the Internet. So my professional activities really started at a time when all of us had a shot at exploring this brave new world, exploring all kinds of new ways of engaging with each other that we’d never even thought about before. I actually had been hired for my first professional job at Mountain Bell a couple of weeks before the MFJ went into effect – I got laid off before I even started. I ended up taking an academic position at the institution where I had been working while I had been finishing my dissertation. Ended up staying there for 11 years before I moved to California to catch a ride on the next tech wave when the Internet privatized in 1995.

Only talking about 1984 really IS ancient history, I was probably even more affected by the Internet privatization in 1995, since that IS what kicked my career in high gear. People forget that you couldn’t get an email address unless you were doing bona fide research, or working on a government project. And of course, 2001, the year of the dot.com crash, after which I realized how important it is for learning professionals to understand the business environments in which we work. It also provided the catalyst for taking a look at the new social media that have now turned into “Web 2.0”.

Curt: Q4. If you had to look back and pick a year or event, when did your career in learning technologies take off and why?

Ellen:1984 was a very very big year. I’ve already mentioned the Modification of Final Judgment, which opened the doors for the data communications and (micro) computer industries to really take off. January 1984 was the month that the Macintosh computer was introduced, which was a completely different way of dealing with personal computing than any of us had ever seen or even imagined before. If you want to get a sense of what a big deal it was, take a look at the video of Steve Jobs as he announces the anticipated release of the Macintosh computer, and how Apple computer was literally going to revolutionize the world. See: http://www.youtube.com/watch?v=lSiQA6KKyJo

Also that year was the Cable Act of 1984, which gave cable providers a measure of parity with broadcasters from which the broadcast industry has never recovered. And of course that was the year that I started my tenure-track academic career at the University of Northern Colorado – when I magically transformed from a student to a professor.

But there have been so many other big events that have given me opportunities to morph and change and evolve. In 1994 I became an entrepreneur and small business owner –a huge learning curve for me. In 2000, I became the chief learning officer of an elearning company with offices in Europe and North America when my company was acquired. That was a wild experience. 2002 was the year I joined the solutions marketing team at Macromedia and found myself working as a senior director of education solutions at one of the most innovative technology companies of our industry. And here we are in 2008, as I take off on a whole new adventure as an industry analyst. I suspect that the best is yet to be.

Curt Q5: What is one thing happening in the world of e-learning that too few people know about?

Ellen: Most people involved in elearning have no idea that most of the world doesn’t have a clue what we are talking about. This is true even inside a company like Adobe, with products like Flash and Photoshop and Dreamweaver and Captivate that are de facto standards for creating interactive digital content for learning. I fear that sometimes the self-evident value of using technology to extend the walls of the classroom, or to create immersive experiences in virtual spaces, makes us less rigorous about ensuring that our elearning solutions are more than flashy displays of technological prowess. Until we can show that we are having a fundamental positive impact on how our enterprises are administered and how services are provided to our stakeholders, I fear that elearning will continue to live just outside the mainstream mission of most of our institutions and enterprises.

Curt Q6: What project(s) are you currently working on that has you most excited and why? Do you have any important publications on the horizon?

Ellen: Well, I collaborated on a report and wrote two articles on mobile learning. Right now I am working on a 3D web paper, as well as a couple of industry intelligence reports that my company will publish in the spring for our clients. Not sure how important they are going to be from a research perspective – I stopped worrying about publishing for promotion and tenure for years and years now, so my writing isn’t intended to provide any new theoretical insight or to demonstrate the tenability of a particular hypothesis. But I certainly hope they will be influential from a business intelligence perspective.

One of the things that has been very troubling to me is the degree to which people outside of the field of elearning do not take elearning very seriously. And the reason they don’t is that elearning does not tend to be viewed as a strategic investment that makes a difference to the health and well-being of an enterprise. They don’t understand that elearning isn’t just an interactive online course that lives inside an LMS. People also don’t seem to understand that elearning isn’t a product, but that it is a professional practice that leverages technology in the service of teaching, learning, and performance support.

In my world view, elearning is so much more than the tools used to produce the content that enable the experiences through which learning takes place. And so, right now my writing is focused on exploring and articulating the value proposition that elearning can bring to individuals and enterprises. And so now you have a better idea of why I am so focused these days on “minding the gaps” between the epistemological frameworks that so often end up becoming knowledge silos.

Curt Q7: What is the most interesting place you have ever presented and why?

Ellen: Why, the ELEARN conference in 2004, of course! I do remember that the conference was quite good, and I was comfortable with the presentation I gave. But what made the event the most memorable for me was that I arrived in Washington DC for the conference the morning after the last Presidential election. There were lots of people who had voted for the guy who won who were doing high–fives on the people movers at Dulles. As someone who had voted for the other guy, it was very depressing. Will be interested to see how things are at this year’s ELEARN, just a little more than two weeks after this year’s Presidential election.

Curt Q8: Tell us one thing people do not know about you.

Curt Q9: What are your hobbies?

Ellen: I am a manic gardener. One of the great things about where I live in California is 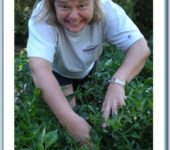 that the climate is great for growing just about anything you can think of. This year I had 20 different varieties of tomatoes, 8 kinds of peppers, watermelons, honeydews, and cantaloupes, six varieties of cukes, peas, beans, zukes, eggplants, tomatillos, onions. We also have fruit trees – apples, pears, figs, lemons, oranges, limes, avocados, plums. Just enough to be able to walk around the yard just about any time of the year and find something to munch on. I grow so darn much stuff I’ve have to learn how to can and preserve and roast and freeze and dry the food that I grow so it won’t go to waste. One of my software executive friends who is a fellow food preserver has created a blog about our adventures in canning called “Can you Preserve.” I do often end up taking boxes of produce down to San Francisco for my friends who live in the “fog belt” and can’t grow their own.

Curt Q11: Can you send any photos, pictures, visuals, etc. (with captions) that illustrate any of your answers that we can use in your introduction?

Ellen: Pictures will be coming in separate emails. (See above and below.)